We recently connected with Tonic.com, a great media company dedicated to promoting the good that happens around the world each day. Tonic shares the stories of people and organizations that are making a difference by inspiring good in themselves and others. Sound familiar? 🙂

We hope to work closely with Tonic in the future but for now we are happy to feature some of the stories from their site at Sports Doing Good. To read more great stories and to learn about Tonic.com, please click here.

Polo Ralph Lauren has been the official Wimbledon designer for the last four years, dressing everyone at the stylish British tournament from umpires to the ball girls. In celebration of the their renewed contract up to 2015, the American fashion house giant decided to donate some of their profits to charity.

And so with that in mind, they enlisted the help of tennis legends, Venus 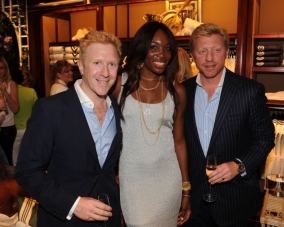 Williams and Boris Becker (both at right) to host a party at their Bond Street store in London last week and got their charitable mission off to a good start. An auction of tennis themed treats raised money for their chosen charity, Too Many Women, whose goal is to raise $1.5 million in one year, for Breakthrough Breast Cancer.

With a pair of tickets for the Men’s Wimbledon Final going for $2,382, the party spirit was soon in full swing (no pun intended). Gwyneth Paltrow (at left) and Matt LeBlanc dropped by to support the cause while Boris Becker welcomed guests, telling British Vogue: “Ralph Lauren is one of the greatest designers of all time,” he said, adding: “He combines elegance and class with sporting grace.”

Whether you like his sporty, preppy attire or not, there’s no debating that Ralph Lauren’s charity work is certainly one classy act. The 70-year-old designer has decided to donate 15 percent of all sales in his London stores during Wimbledon to Too Many Women. Now that’s worth raising a glass of Pimms to.