US soccer’s embrace of their sisters in Haiti

Earlier this year we featured a story on a game between Under-17 women’s soccer teams from the U.S. and Haiti. Played shortly after the catastrophic earthquake in Haiti, the young ladies played a hard fought game that did end up in a 9-0 victory for the U.S. How could that be hard fought? Because it is not all about the score. Nor is it all about the game. After the contest, the team from the U.S. comforted the goalies from Haiti, a young lady upset about the outcome of the game. Their display of sportsmanship and friendship was overwhelming for all involved. 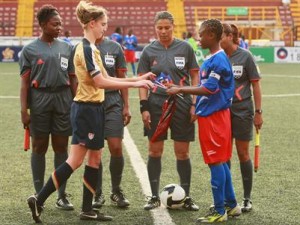 One of the U.S. players, Bryane  Heaberlin, built upon her experience to give the team from Haiti an opportunity to come to Florida. After starting a foundation, she got it done.

The video can be found by clicking here.