A peace (and sport) process that is actually working

The Middle East peace process, once again, is underway. Not terribly confident about its prospects. Part of that is based on the multitude of past failures, the often-uncivil nature of the discussions, and the lack of agreement on goals. Frankly, the sides seem resigned to, if they can’t get 100% of what they want, blocking the other side from getting anything. Thankfully, we are seeing a process that is encouraging in its early successes, the commitment of diverse parties whose joint participation bodes well for continued efforts, and the civil nature of the participants.

In recognition of the efforts to drive this process, one of our friends was honored this past week. H.S.H. Prince Albert II received an award from the United Nations for the work he and Peace and Sport have done over the past few years to help individuals and communities around the world achieve that most precious of ideals, the chance to live a life without fear, with positive relations with their fellow man and woman, boy and girl. This logical goal is one that is infused in all of the other Millennium Development Goals. And because of that, Prince Albert II and Peace and Sport, and by extension, all of those who work to achieve positive change, are deserving of this recognition. Congratulations.

H.S.H. Prince Albert II Receives a United Nations Award for His Commitment to Promote Peace through Sport; Peace and Sport is honoured in the “Millennium Development Goals” Awards

“Contributing to peace is the most beautiful fight sport can offer. And this fight, we need to win it together.”

This message, conveyed by Joel Bouzou, President and Founder of Peace and Sport and Advisor to His Serene Highness Prince Albert II of Monaco was warmly applauded by 500 Heads of State, sports champions and major international decision-makers gathered at the Waldorf Astoria in New York on 19th September for the prestigious “Millennium Development Goals” Awards (MDG Awards). 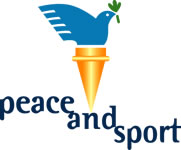 Organized by the MDG Awards Committee and the UN Office for Partnerships, this event pays tribute to governments and individuals from civil society who have made remarkable and exemplary efforts to contribute to the achievement of the United Nations Millenium Development Goals.

During his speech Joel Bouzou said: “Sport can offer better than the individual performance, it can help achieve a collective and social target; in a way, I consider it a normal pay back to the community for all the good things sport brought to me. (…) Now, day after day, through Peace and Sport, I feel the strength of sport and how much it can change the mentalities and habits. Six weeks ago, I was in Haiti where we have developed a program in partnership with UNICEF and the Haitian Olympic Committee in the refugee camps. The eyes of these youths, boys and girls, forgetting for one hour the surrounding chaos, that was something fantastic.”

H.S.H. Prince Albert II of Monaco, in his capacity of High Patron of “Peace and Sport, l’Organisation pour la Paix par le Sport” received a Special Award in recognition of his “global leadership and passionate commitment as a champion of the cause of peace through sport”.

In a message read out by Joel Bouzou during the ceremony, the Sovereign of the Principality of Monaco declared:

“Over the years, as a Head of State, a member of the International Olympic Committee and an athlete, I have had the great fortune to personally witness many examples of excellent work and efforts to help towards achieving the Millennium Development Goals thanks to Sport.”

“The conviction I want to share with you today is that it is our responsibility and duty, governments and individuals, to foster the use of Sport for peace-building purposes and increase its contribution towards achieving the Goals. You can rely on my personal commitment and the involvement of the Principality of Monaco to make this happen.”

This accolade, on the eve of the 65th United Nations General Assembly, represents a major step in the development the Peace and Sport organization, whose principal objective is to raise awareness amongst world leaders about the immense potential of sport to contribute to sustainable peace, to reconciling populations and to education.

The next day, HSH Prince Albert II, who is also Co-Chair of the Group of Friends on Sport for Development and Peace, a member of the International Olympic Committee and a former Olympian, and Joel Bouzou both took part in a Roundtable with the theme “The Value of Sport as a Development Tool”, organized by the United Nations Office on Sport for Development and Peace.  The UN Secretary General, Ban Ki-moon, opened this work session.