Peace and Sport Image of the Year Award – The IndoPak Express

We are very happy to highlight here Peace and Sport’s Image of the Year Award. Our friends at Peace and Sport partnered with SportelMonaco and Getty Images to once again select an image that captures sports’ ability to promote peace, to serve as a vehicle for better relations. The winning image is of two individuals we have featured more than once at Sports Doing Good.  Please read the press release below to learn about these wonderful representatives of peace and sport.

Winners of the Peace and Sport Image of the Year, an Indian and a Pakistani Unite for Peace

For three years, this distinction presented in partnership with SPORTELMonaco and Getty Images, has rewarded the best image of fraternity through sport or a symbolic moment showing the ability of sport to advance peace in the world and to encourage reconciliation among peoples.

The Peace and Sport Image of the Year Award will be given to the Indian Rohan BOPANNA and Pakistani-UL-HAQ AISAM QURESHI, two tennis players who managed to bring the political authorities in their respective countries closer, through their own history of personal friendship and commitment.

Rohan (Hindu) and Aisam (Muslim) have played in a doubles team for three years and are building their careers together, despite historical hostilities that divide India and Pakistan. Motivated by their friendship, they decided to actively campaign for peace between their two nations. 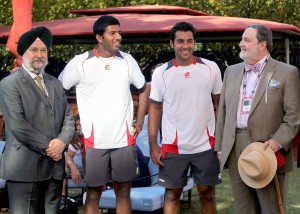 During several events on the ATP World Tour 2010, they wore warm-up gear displaying the slogan “Stop War, Start Tennis”, thus affirming their belief that friendship between India and Pakistan is possible.

That day, the United Nations ambassadors for the two countries joined Indian and Pakistani fans in supporting both players.

This initiative reminds us that sport is a universal language and it opens the way to dialogue, transcending political, racial, religious and social differences. It sparked unprecedented enthusiasm  from the media.

Joel Bouzou, President and Founder of Peace and Sport, declared: “The message of peace given by Rohan and Aisam is a unique source of inspiration for young people in their respective countries, but its significance does not stop there. They use their charisma and their sporting success to raise awareness amongst the entire international community, their fellow athletes and political authorities in their countries, as we saw at the U.S. Open. I hope that their appeal will lead the way to new rapprochement initiatives.”

“Sport’s greatest victory is not measured in terms of medals. It is measured by its ability to positively change people’s lives and bring them hope. And that’s exactly what Rohan and Aisam succeed in doing. They demonstrate what champions can achieve when they use their celebrity for a good cause. ”

This year, for the first time, the winner of the Award for Peace and Sport’s Image of the Year was chosen by a public voting system on Internet. The winning photograph, submitted by the ATP World Tour, won nearly 60% of the votes.

The Award will be presented to Rohan Bopanna and Aisam Ul-Haq Qureshi and representatives of their countries’ authorities during the Gala Evening of the 4th International Forum Peace and Sport, which will take place on 2 December in Monaco in the presence of HSH Prince Albert II and 450 international leaders from the worlds of sport and peace.

The players’ next humanistic goal is to organize a friendly tennis match at the Wagah border, the only checkpoint that exists between India and Pakistan. This symbolic event, supported by Peace and Sport, will incarnate the wish of Indian and Pakistani young people to live in peace.