Playing tennis with a purpose, just like Venus and Serena

There are many casualties of war. Yes, that is an understatement. There are too many losses of life and ways of life. We have seen both with returning soldiers in the U.S. and victims abroad, the damage that war can exact both physically and mentally.  Often, the damage caused to one drives that of the other.

Thankfully we have learned of programs that recognize the importance of helping these individuals and their communities get some part of their life back through the advent of both physical and mental activity. Isolation from others at a time when support from family, friends, and yes, even strangers is most needed, and hopefully available, is certain to lead to a worsening condition. The existence of these programs, including ones that try to engage these individuals in sports, can be incredibly helpful to those who may be caught in the understandable cycle of despair caused by the huge change in their life circumstances.

In a terrific piece by Barbara Surk from AP and published in the Fort Wayne Gazzette, you will read about Zainab Khadim Alwan, a young Iraqi who has found a semblance of joy and purpose she felt she lost after her legs were lost in a bombing around her home. Tennis was her passion and with the encouragement of family, friends, and yes, strangers, she has reconnected with that passion, becoming an elite athlete as she had once envisioned.

The full article can be found by clicking here with an excerpt below.

Iraqi tennis player aims to be Venus in wheelchair 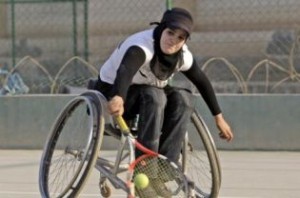 As a girl, Zainab Khadim Alwan cut school to watch American tennis stars Serena and Venus Williams play, imagining herself some day becoming just like them.

Even the rocket that blew off her legs four years ago hasn’t dampened her desire to play the game. It’s just that she now does so in a wheelchair…

“I choose tennis because it’s a difficult game,” Alwan said. “I wanted to prove despite losing my legs, I haven’t lost my mind.”

About 2,000 Iraqi athletes with disabilities compete in swimming, track and field, fencing, volleyball, shooting, weight-lifting and tennis. More than 20 percent lost their arms and legs in suicide bombings, shooting attacks, roadside bomb explosions and as a result of mortar or rocket fire, according to Iraqi officials…

She almost gave up on life after the attack that killed her sister and sister-in-law. She dropped out of school, endured eight surgeries and distanced herself from her family, friends and neighbors.

“I could not cope with reality and for a long time I tried to convince myself it was all a bad dream,” Alwan said. With the support of her brothers and her father, who refused to go with the social flow of hiding their disabled sister and daughter from the outside world, Alwan got fed up with despair, joined a club and signed up for the sport she liked before the attack.

With Iraq’s violence down from its mid-decade peaks, Iraq’s sports clubs have stepped up efforts to show a new generation of disabled athletes that they can still train, compete and triumph.

“We try to convince the handicapped people that it’s not the end of the world and that life with disability has a lot of potential,” said Ahmed Flaih Ajaj, president of Al-Thura Sports Club, specifically created in 2003 for handicapped athletes.

You can read the rest of the article by clicking here.