For good or bad, mostly good I would say, athletes are often looked at his heroes, as role models. They exploits on the field motivate thousands to try harder, to do more, to be better. Those are worthy pursuits. Their efforts off the field often do the same. But the former is needed for the latter to take hold. For a very long time, it was mostly male athletes that held that position as hero athlete and occasional role model. They dominated the media’s attention, and held sway with the general public, especially young people. Sure  there were females who held similar roles but there numbers were dwarfed by their male counterparts. That shouldn’t be surprising as the opportunities for women to participate and excel in sports have also suffered in comparison to their male counterparts.

Thankfully, much has and continues to change. We have female athletes in a host of sports from every country pushing themselves to great heights in the field of athletics. They are attracting the public’s attention. Maybe no one right now is capturing our attention more than Marta, Brazil’s imaginative football-playing superstar. Marta is spending the next few weeks wowing her teammates, fans, and to their chagrin, her opponents, at the Women’s World Cup in Germany. To get a sense of her flair, please click here to see her play a couple of days ago. For a montage of incredible play from her career, check out this video from Vimeo.

With this wondrous play, comes global attention, which is great for Marta and for women’s sports. It, however, brings responsibility and pressure. It seems that Marta is just as immune to that pressure off the field as she is on it. Marta is a Goodwill Ambassador for the United Nations Development Programme (UNDP) and part of an international campaign mounting around the world’s top women’s football event taking place June 26 to July 17 in cities across Germany.

Despite high profile advances, women still make up only 19 percent of legislators and less than 10 percent of world leaders. They continue to earn less than men when they do the same work and, in many countries, have unequal access to land and inheritance rights.

“The strength, industry and wisdom of women remain humanity’s greatest untapped resource,” says Marta in an advertisement delivered in international media. “Only through women’s full and equal participation in public and private life can we hope to break poverty cycles and achieve the MDGs.”

Marta’s sentiments mirror those that infuse the efforts of Nike, GirlsGoGirls, and other organizations that have identified the development of girls and women as inextricably tied to society’s development, development that is the aim of the MDG’s.

While companies and non-profits are important in the effort to attract attention, support and money to these causes, athletes are the ones who galvanize the general public. It is wonderful to see that those athletes now included more and more women. 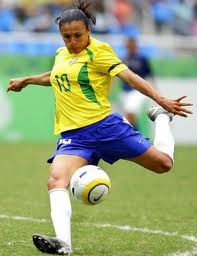