Sports facilities – If you build it…

The idea of playing sports is great. What’s even better? Actually playing. We have written before about the facility and equipment deficit facing communities in the U.S. and around the world. Kids and adults rarely suffer due to a lack of desire. It is a lack of access that plagues them and it is here that so many are doing great work to bring access to these communities. Those include Barclays Spaces for Sports, love.futbol, KaBOOM!, Good Sports, and many, many others.

In addition to giving people a chance to play, these fields, equipment, and spaces are representations of a commitment to, respect for, the power of play. These are marketing tools, if you will.

We received a news item from love.futbol that we felt really captured this idea and want to share. 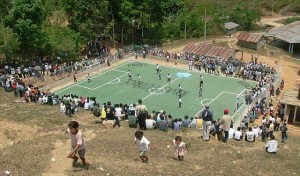 “In many ways, both countries (Japan and U.S.) owe their success in Women’s soccer to the opportunities provided their female players from a very young age. But millions of young girls throughout the world are not afforded such opportunities.

At the heart of love.fútbol’s mission is a desire to provide all children, both male and female, with the right to play soccer in a safe environment.

Four years ago, love.fútbol completed a project in Las Canoas Altas, a small village in western Guatemala. Soon after the field’s construction, the local primary school formed a girl’s team that began practicing on the field. Just last week, the team won their regional tournament and will now represent the entire province of Sololá in the national Guatemalan tournament next year. This is a huge honor for a small town that struggled to provide opportunities for its girls before the construction of its first soccer field.

When surveyed about their soccer habits, more than half of the girls revealed that they did not play soccer prior to the presence of the love.fútbol field.”