Thanks for giving – time, money, blood – to those near and far away

On a day now often associated with eating, football, more eating, and more football, there is an understandable tendency to forget what Thanksgiving is all about. However, most people remember to take at least a few moments to reflect on what they have to be thankful for. And some folks use the day to share their good fortune, whether it is via their time, energy and/or money, with others not so fortunate. Thanksgiving is perfectly named.

Two former teammates in the NFL, Anquan Boldin and Larry Fitzgerald, have come together to draw attention to the continuing drought and famine situation in Africa. These are two U.S. citizens looking to help their fellow world citizens thousands of miles away. Their efforts continue long after any single day of reflection, for giving has no deadline nor geographic boundaries. Look outside your window or across the world and you will find opportunities to help on Thanksgiving, the day after, and every other day. Go do it! (I will be donating blood today) 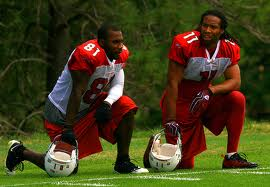 You can read the press release from PR Newswire by clicking on “NFL Stars Reunite to Fight Effects of Drought & Famine in East Africa.” An excerpt is provided below.

Boldin and Fitzgerald call on football fans and others to support efforts to bring critically needed food and water to people in Ethiopia, Somalia and Kenya, and have released a public service announcement to raise awareness and funds for the region. The former teammates are both perennial Pro Bowl favorites and played together in Super Bowl XLIII. Both players are also
well-known contributors to communities in need. They are exemplary role models on and off the field.  This effort represents the first time the two stars have teamed up publicly to support a cause.

“This season the rains failed in many areas, causing the worst drought in 60 years,” said Boldin, who joined the Baltimore Ravens in 2010 after seven seasons with the Arizona Cardinals. “More than three months after famine was declared in Somalia the disaster in East Africa continues and help is still desperately needed.”

The July 2011 declaration of famine by the United Nations represented the official recognition of a disaster that is affecting more than 13 million people in Ethiopia, Kenya and Somalia. Despite brief rains falling in some areas, delivery of aid is still critical and in some cases made more difficult by the rains, which can make roads in many remote areas virtually impassable.

“In a region where life in many places depends on the ability of trucks to deliver water to remote areas, making sure aid gets there is more important now than ever,” said Fitzgerald, now in his eighth season with the Cardinals.

“Anquan and I are working together with Oxfam America to keep the crisis in the public eye and ensure that critical aid gets delivered to those who need it.”

Oxfam
America is an international relief and development organization that creates lasting solutions to poverty, hunger, and
injustice. Together with individuals and local groups in 99 countries, Oxfam saves lives, helps people overcome poverty, and fights for social justice. Oxfam America is an affiliate of Oxfam.  http://www.oxfamamerica.org/