Is this our brain on sports? Who is protecting our most valuable asset?

The New York Times recently published an excellent, and very disturbing, 3-part series on the life and death of Derek Boogaard, a National Hockey League (NHL) player. Boogaard, who was known as an enforcer in the League – basically he was paid to be a boxer on skates – died at the tender age of 28. Derek died of a drug and alcohol overdose but he was also found to have suffered severe brain damage. You can find “Punched Out: The Life and Death of a Hockey Enforcer” by clicking here. 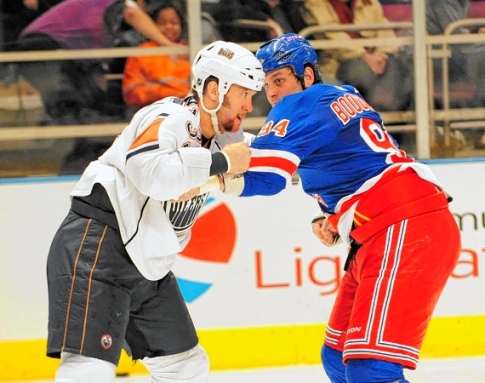 We have seen more and more stories over the past few years in sports addressing the issue of brain health, whether the physical – concussions – and the mental – our health, mood, thinking, memory. These stories have often followed the work done by the researchers at Boston University’s Center for the Study of Traumatic Encephalopathy and by others around the country who are studying brain injury, concussions, player safety, and preventative measures. In addition, the cases of athletes such as baseball players Zach Greinke, Khalil Greene and Joey Votto; football player Ricky Williams, and several other elite and amateur athletes have shined a light on the issue of depression, social anxiety order, and mental illness in general, generating even more stories.

Our most valuable asset as a human being, i.e. our brain, allows us to take in information, process, and react. This is truly a remarkable thing. It is what separates as human being from all others. However, when that asset is damaged, our short term and long-term health is compromised. In some cases the cause of the damage may be non-sports related (biology may be the cause) and sports is but the environment which exacerbates the problem (often it can be a source of comfort and recovery). However, we have seen clearly in some cases that sports is at least a contributing factor to the damage done to the human brain. And after some hand-wringing some sports entities, e.g. the NFL, are coming around. And with their new found enlightenment we see others follow suit, e.g. at the college, high school and grassroots levels, when it comes to changing rules and policies to better serve the athlete.

It seems, though, that we will have to wait for some more evidence – does that mean deaths? – before we see significant action in the NHL and by significant, we mean a ban on fighting. NHL Commissioner Gary Bettman was quoted in the article saying when it came to fighting in hockey, “If you polled our fans, probably more would say they think it’s part of the game and should be retained.”

There are a couple of problems with that statement. First, commissioners and other executives in sports are not ones to put so much value into what fans think when it comes to league policy. They do what is best for the owners and the players. How do I know? Because they say all the time at conferences I have been to and where the average fan is nowhere to be seen. Sure they care about what fans think, but are not moved so much to enact policies they don’t agree with. Second, is the word “if”. This implies that the League has NOT done that survey. Thankfully, others have. Earlier this year, in an Angus Reid Public Opinion poll, there was agreement that head shots should be taken out of the game but when it came to fighting there was disagreement betweens fans of the sport and the general public. And there is the rub. Who should the League listen to, if it listens to anyone?

This is certainly not an easy problem to solve. But what the story of Derek Boogaard and others tell us is that we must do what is right when it comes to the brain health of our pro, college, HS and youth athletes. The NFL has come around. When will the NHL?