Welcome to week sixty-five of the Sports Doing Good newsletter.

Every week we have been able to share with you an array of stories that inspire, encourage, motivate, and/or warm the heart. We actually haven’t given you too many where you laugh. And it is not because we don’t love to laugh. We do! And there are definitely occasions in sports and a host of athlete-jokesters out there who can provide a steady stream of good humor. So this week we are thrilled to feature a story that involves 10 skits from TV in which sports and humor are front and center. Enjoy.

In addition, we are excited to share stories that, yes, inspire, encourage, motivate and warm the heart, including: the touching gesture by the Boston Marathon winner, the powerful Dare to Be Project, a global journey for a young basketball player, the path from refugee to coach and leader, and an example of sportsmanship that surprised many. These stories and others, along with some humor, are what define Sports Doing Good.

Boston Marathon winner returns his medal to city
“Sport holds the power to unify and connect people all over the world,” Lelisa Desisa of Ethiopia told the crowd through a translator. “Sport should never be used as a battleground.”
http://news.yahoo.com/boston-marathon-winner-returns-medal-city-171833313.html 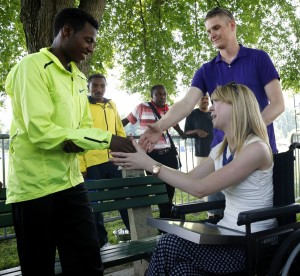 Boston Marathon 2013 men’s winner Lelisa Desisa, left, of Ethiopia, greets Boston Marathon bombing victims Adam Davis, top right, and his wife Adrianne Haslet-Davis, Sunday, June 23, 2013, in Boston. Lelisa ran in the Boston Athletic Association 10k after which he presented his 2013 winners medal as a gift to the city in tribute to the victims of the bombing at the Boston Marathon finish line in April. (AP Photo/Michael Dwyer)

What’s next for Mary Cain?; Able to run with the best in the world at 17, the high school phenom has options
After all, the logic went, if she really cared about being part of a team, she would’ve stayed with the one she had. But there are reasons to think otherwise, and Cain’s parents are a big clue. They have limited Mary’s interaction with the media, kept her focused on school and competing (and less on time), and they helped select a coach who is world-class and flexible.
http://espn.go.com/sports/endurance/story/_/id/9411919/endurance-sports-next-mary-cain 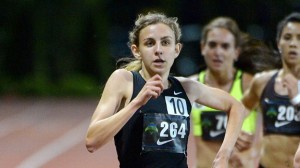 The question for Mary Cain comes down to whether she should run in college or focus on turning pro. Kirby Lee/USA TODAY Sports.

Howie Garfinkel – Scout is a Five-Star Original in Basketball
Garfinkel’s life in basketball — whether it be as a scout, a coach, a summer camp creator or a director of basketball clinics — will be honored Sunday when he is inducted into the Capital District Basketball Hall of Fame, the ceremony to be held at the Hilton Hotel in Troy, N.Y.
http://www.nytimes.com/2013/06/23/sports/scout-is-a-five-star-original-in-basketball.html?src=rechp 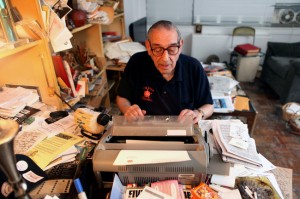 Amber Neben puts new spin on adversity
I think it is really important to understand life is often not easy and everyone faces challenges and adversity. It is not if, it is when. And when this happens, how will you respond? The kids can control their attitudes and their effort; they can choose to work hard and make good decisions; they can choose to pick themselves up and fight on. It is my goal to impact and inspire.
http://espn.go.com/espnw/athletes-life/article/9416803/espnw-olympic-cyclist-amber-neben-looks-empower-inspire-kids-dare-project 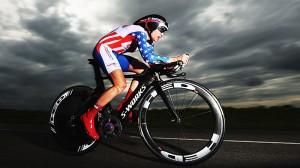 Amber Neben is encouraging underprivileged kids to chase their dreams and passions through The Dare To Be Project. Bryn Lennon/Getty Images

Olympic Gold Medal Gymnast Jordyn Wieber Partners with Mary Kay in Effort to End Dating Abuse
As a teenager and recent high school graduate, Olympic gold medalist Jordyn Wieber was shocked to learn that one in three young people is a victim of physical, emotional or verbal abuse from a dating partner. The alarming statistic prompted Wieber to lend her support and raise awareness of teen dating abuse as the official spokesperson of Mary Kay Inc.’s “Don’t Look Away” campaign to help prevent and end dating abuse.
http://www.justmeans.com/press-releases/Olympic-Gold-Medal-Gymnast-Jordyn-Wieber-Partners-with-Mary-Kay-in-Effort-to-End-Dating-Abuse/12897.html 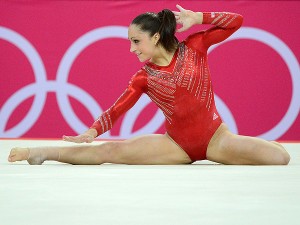 At 35, Haas Still Dreams of Tennis Like a 7-Year-Old
And so, while so many of his former rivals and peers have moved on, Haas is still putting his ball cap on backward and competing with the best. This will be his 14th Wimbledon, and he comes into it seeded No. 13, which he has long considered his lucky number.
http://www.nytimes.com/2013/06/24/sports/tennis/at-35-haas-still-dreams-of-tennis-like-a-7-year-old.html?hpw 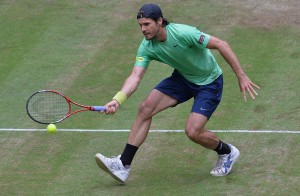 A Baseball Lifer Adds Chapters, a Game at a Time
He loves the determined pursuit of the nearly unachievable by the young men around him. The dream to become not the next Mickey Mantle, but perhaps another Doc Edwards. “I pray for them a lot to get to the big leagues,” he says before excusing himself to fill out a lineup and a manager’s uniform. “I do.”
http://www.nytimes.com/2013/06/26/us/a-baseball-lifer-adds-chapters-a-game-at-a-time.html?pagewanted=2&_r=1&hp 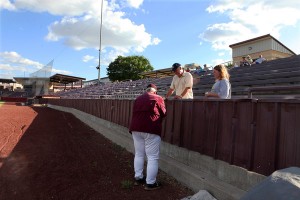 American Nick Pugliese breaking barriers by playing soccer in Afghanistan
Soccer has melted the social barriers for Pugliese, allowing him to get to know his teammates and their families. They’ve found common ground through their use of basic English and Dari, the local language, and without fail through the game itself. “It speaks to the power of: Can you play or not? Can you help my team win? If so, you’re valued,” Pugliese says.
http://sportsillustrated.cnn.com/soccer/news/20130627/american-soccer-player-afghanistan-nick-pugliese/#ixzz2XcHP2t2n 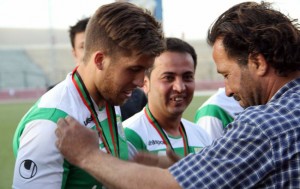 Nick Pugliese receives his medal after winning the Kabul Cup with Ferozi FC in May.

A Hunger for a Better Life May Lead to the N.B.A.
His new passport says he is Greek, but Giannis Adetokunbo has lived a struggling immigrant’s life. He has peddled goods on city streets to feed himself and his brothers. While other families ferried off on island vacations, his often changed apartments in search of cheaper rent.
http://www.nytimes.com/2013/06/26/sports/basketball/in-an-athens-suburb-nba-scouts-unearth-a-rare-find.html 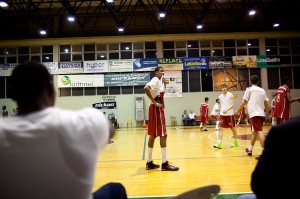 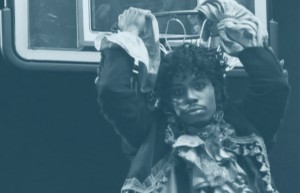 From Refugee Camp to Living a Dream
“Survival in the camp was tough enough,” he recalled. In these conditions, children grow up perceiving their potential as limited by their immediate and often cramped surroundings. The turning point in his life, Bilal says, was when he volunteered with Right To Play.
http://www.righttoplay.com/International/news-and-media/Pages/FromRefugeeCamptoLivingaDream.aspx

Steve Patterson Award for Excellence in Sports Philanthropy Finalists Announced
The prestigious Patterson award from RWJF, the nation’s largest philanthropy devoted solely to improving the health of all Americans, celebrates and promotes those in the sports world who are improving lives by leveraging the unique influence of sports. This year’s finalists join an impressive and growing list of sports organizations and individuals who are answering the call to give back.
http://www.rwjf.org/en/about-rwjf/newsroom/newsroom-content/2013/06/steve-patterson-award-for-excellence-in-sports-philanthropy-fina.html

Hoops4Hope: Equipping the young with the tools to handle life’s challenges
There are few elements across the spectrum of humanity that bind, and connect us as people; no matter what our age, race, or cultural background. They validate our bond as humans, and in many cases drive the most profound change that is occurring across the globe, that of bringing us together as a global community. The spirit of friendly competition through sport does exactly this.
http://mission.tv/photos/south-africa-zimbabwe-hoops4hope/?utm_source=ON+A+MISSION+Newsletter&utm_campaign=f9dc3511eb-Newsletter_6_12_2013_on+a+mission_list&utm_medium=email&utm_term=0_2456137e9b-f9dc3511eb-41966593 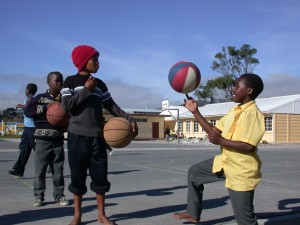 Marge Bishop: Boston Bruins gave me tickets for life
She kept the gesture to herself for years but finally decided she wanted the world to know about Jacobs’ generosity. “I’m just a regular person,” Bishop said, according to The Globe. “And I’ve been given this remarkable once-in-a-lifetime gift. It’s incredible. It’s the most remarkable story.”
http://espn.go.com/boston/nhl/story/_/id/9423951/fan-77-boston-bruins-gave-tickets-life 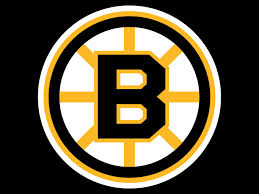 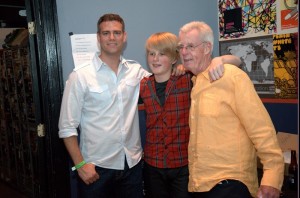 Bruins became champions of shaken city
When the Bruins played the first major sports event in Boston after the bombings, they lit up the Garden ice with images of blue and yellow ribbons — the official Boston Marathon colors — and began wearing blue and yellow Boston Strong decals on their helmets. The rendition of the national anthem that night, with the singer yielding to the voices of the crowd, became emblematic of the city’s resilience.
http://www.bostonglobe.com/metro/2013/06/26/the-bruins-despite-defeat-lifted-grieving-city/kwAVUEy4OWxNqmQARNPivJ/story.html 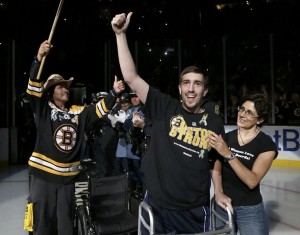 Jeff Bauman and one of his rescuers, Carlos Arredondo (left), were honored before the start of Game 6 Monday. Bauman lost both his legs in the attack, but stood on a pair of prosthetics.  REUTERS/Pool.

New Reality TV Series Connecting Former Athlete Mentors with Fallen Colleagues Poised to Reach Fundraising Goal to Bring Show to Completion
The series is described as a cross between “the psychological drama and intensity of Celebrity Rehab…and the interwoven storytelling of Celebrity Apprentice or even Survivor.” In other words, Reset TV is something rarely seen: quality reality-based TV.
http://finance.yahoo.com/news/reality-tv-series-connecting-former-124000357.html 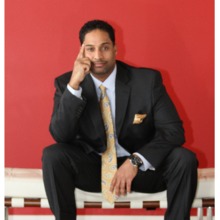 Blackhawks Take Out Full-Page Ad in Boston Globe Thanking Bruins
The Hawks formed the customary handshake line with the Bruins after winning the Stanley Cup in Boston on Monday, but that wasn’t the only form of recognition the new NHL champs wanted to show their worthy opponent after one of the best Stanley Cup Finals in a while. The Blackhawks organization went a step further Friday (the day of their victory parade, in fact) to give one more stick tap to the Bruins.
http://nesn.com/2013/06/blackhawks-take-out-full-page-ad-in-boston-globe-thanking-bruins-photo/ 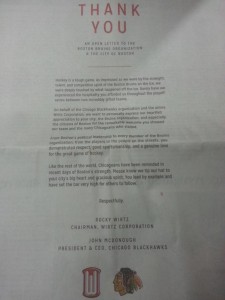 NFL Foundation Kicks Off Summer with nearly $700,000 in Grants to Youth Football Camps
These are free, non-contact football camps for children ages 5-18 that focus on teaching proper technique and sportsmanship. All camp coaches must complete an online education course with instruction on injury prevention, including heat and hydration. Among the recipients, nearly 70 current and former NFL players and coaches are working with USA Football to host FUNdamentals camps this summer.
http://nflcommunications.com/2013/06/27/nfl-foundation-kicks-off-summer-with-nearly-700000-in-grants-to-youth-football-camps/ 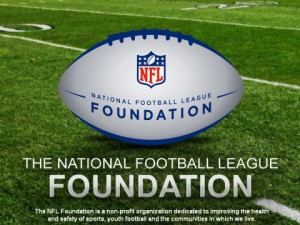