Welcome to week one hundred fifty-seven of the Sports Doing Good newsletter. This week’s 10 stories include:

Introduction
Winning is obviously an important part of sports. While it may not be “the only thing,” winning is certainly a noble goal, as it motivates us to try hard and play well, whether for ourselves or as part of a team. However, loving sports, especially as a fan, is not solely dependent on having your team win on a regular basis. I should know. (thank you Knicks, Mets, Jets, and Hoyas.) Other things that individuals, teams, or organizations do can help establish and strengthen our bonds with them. We highlight such things every week at Sports Doing Good. This week is no different.

The NBA’s Denver Nuggets turned a clinic with some Special Olympians into an autograph session in which the Nuggets players were not just giving autographs, they were getting some as well. This simple but powerful gesture was a brilliant way to express to these young athletes that they matter, that they are important, and getting their autograph was special to the pro players.

We also have stories this week with: MLB’s Chicago White Sox and one of their most special fans; the Lakers partnering up on a community development effort; the New York Mets’ Curtis Granderson holding a youth baseball clinic; a fan of those same New York Mets who turned his affection for the team – win or lose – into a booming business; and how rookie NBA player Nik Stauskas may have just stumbled on to the best nickname in the game. (Who doesn’t want some Sauce Castillo!?!?)

Tomorrow, April 6, is the International Day of Sport for Development and Peace – http://www.un.org/en/events/sportday/. There will be many around the world acknowledging through action and through words the importance of sport in personal and societal development. We applaud all of these efforts as they are sure to move our world in the right direction.

Ugandan football coach tackles HIV
CNN African Voices ran a series about Majidah Nantanda, who is the head coach of the Ugandan Women’s Senior National Football (Soccer) Team. She has an incredible story and seeks to use sport to empower women. She also works with Tackle Africa to teach about HIV through football. There are three videos in her series: 1) Football coach breaks down barriers; 2) Female footballer gets rare opportunity; 3) Ugandan football coach tackles HIV.
http://edition.cnn.com/videos/world/2015/03/16/spc-african-voices-majida-nantanda-c.cnn/video/playlists/intl-african-voices/Enjoy 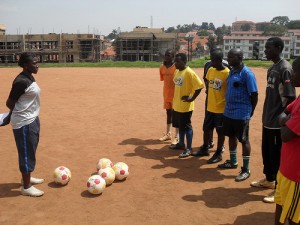 Denver Nuggets Reverse Roles, Get Autographs from Special Olympians
Nurkic was among of the Nuggets getting autographs from the Special Olympians, and one particular photo has picked up steam online. Posted originally on Imgur, the photo shows a youngster intently writing on autograph on Nurkic’s shirt. The exchange of signatures between the Nuggets and Special Olympians was one of the event’s more memorable moments. “The little bit of effect that we have on them is nominal,” Nuggets coach Melvin Hood said. “I think it goes the other way. It’s the effect they have on us. They change our lives.
http://www.thepostgame.com/blog/good-sports/201503/denver-nuggets-special-olympics-clinic-autograph-request-players
(Video, https://youtu.be/4_mTxyEoRew)

Day at camp an emotional experience for White Sox fan
“[Adam] Eaton and [Chris] Sale were my favorite players and they talked the longest to me,” Von Schaumburg said. “I’m the biggest diehard Sox fan in the world. I cried multiple times today.” Von Schaumburg pointed to Rudhman and added that she was witness to the tears shed. It was a great moment for the young man who has the White Sox promising 2015 season at the forefront of his mind despite the valiant fight he faces on a daily basis. “This has been unbelievable,” Rudhman said. “Sometimes you get opportunities that shake you to realize how fortunate we are and the position we’re in,” Ventura said. “Sometimes you get in a situation where it’s special to meet somebody like that.
http://m.whitesox.mlb.com/news/article/114699262/fans-day-at-white-sox-camp-full-of-emotion

LA Lakers and East West Bank Plant Trees at Local School
Julius Randle, the Lakers Girls, and East West Bank will join with TreePeople staff, partners and over 100 volunteers on Saturday, March 14th, to transform 20th Street Elementary School’s urban campus. More than 4,000 square feet of impermeable asphalt has been removed to make way for a total of 30 Raywod Ash, Australian Willow and Crape Mertyle trees to grace the schoolyard and provide some needed shade and nature. The tree planting is part of the Lakers Trees for Threes eco-initiative. East West Bank has pledged to plant a tree in Los Angeles for every three pointer made by the Lakers team at STAPLES Center. The 30 trees planted on Saturday are just some of the trees earned by the Lakers this season.
http://bostonese.com/2015/03/la-lakers-and-east-west-bank-plant-trees-at-local-school/ 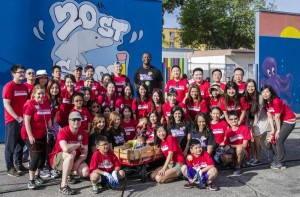 Why My Photo from Guinea Sparked a Soccer Star’s Search for One Boy
When Mertens reached out to find the student in that photograph, my photo editor Kurt Mutchler and I were happy to help. While Mertens and his sponsors intend to provide jerseys and balls to the children of Meliandou, we are also in discussions regarding the best way to help the students and villagers in a more sustainable way. Thank you Dries Mertens for your big heart. As a photojournalist, you always hope that the images you capture resonate beyond the fraction of second of that moment, to impact people’s lives in ways you can never imagine. This occurrence reminds me of the enduring, connective power of photography and reinforces the value of the new social media through which images are so widely shared.
http://proof.nationalgeographic.com/2015/03/27/why-my-photo-from-guinea-sparked-a-soccer-stars-search-for-one-boy/?utm_source=Facebook&utm_medium=Social&utm_content=link_fbp20150328proof-soccerstar&utm_campaign=Content&sf8270836=1 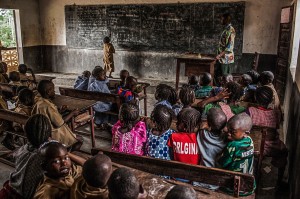 A near frame of the one Muller posted on Instagram showing the face of the young boy (lower right) wearing Dries Mertens’s soccer jersey during French lessons. The school just opened a month before, having closed for more than a year after the Ebola outbreak. 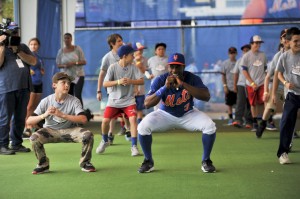 Brazilian Olympian using sport to turn underprivileged kids into ‘superheroes’
Brazilian judoka and Olympian Flávio Canto has been using sport for over 10 years as a tool to promote human development, social inclusion and healthy lifestyles. Ahead of the International Day of Sport for Development and Peace on 6 April, Canto explains how his non-profit organisation in Rio de Janeiro is creating “superheroes”. Canto has always wanted to change the world. He confides: “When I was a young kid, I wanted to be a superhero.”  While no magic cape allowed him to fly, he has achieved something greater that is changing the lives of thousands of underprivileged children and young people every day.
http://www.olympic.org/news/brazilian-olympian-using-sport-to-turn-underprivileged-kids-into-superheroes/244274 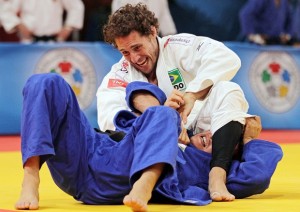 How a Long-Suffering Mets Fan Built a Business from His Pain
Four years later, Meenan, 34, no longer needs to resort to such guerrilla tactics. The 7 Line, a clothing company geared toward Mets fans, has a prime-real-estate kiosk in center field at the team’s Citi Field. It has grown into perhaps the most successful independent fan-run clothing company in pro sports–and according to sports licensing expert Scott Sillcox, likely the only such company to ink an in-stadium deal with a major league. And, for what it’s worth, its name often autocompletes on Google ahead of “the 7 deadly sins” and “the 7 dwarfs”–which prompted one Twitter user to observe, “You’re more popular than the Bible and Disney.” Not bad for a company Meenan started in his parents’ basement.
http://www.inc.com/kevin-j-ryan/darren-meenan-of-the-7-line-mets-t-shirt-company.html

A Haven Between the Hoops in Kurdistan
Patrick Cline, an American, has been a coach of the team since 2010. Cline takes a tough-love approach to coaching – in a region where many women are often restricted from physical activity, Cline aims to push his players. Before joining the team, most of the girls could not run for longer than two or three minutes without stopping. Now they run for 15. “In the beginning the girls are a little shy,” Taher said, “but once they come to practice and they get to play in games, they realized there’s nothing to be shy about — playing is something to be proud of.”
http://lens.blogs.nytimes.com/2015/04/01/amid-uncertainty-in-iraq-basketball-offers-continuity/?ref=sports 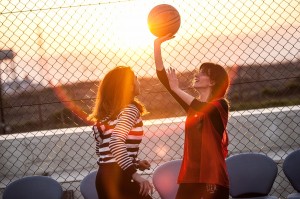 Lea Hariri, 20, left, and Beyan Salah Taher, 23, after a team practice at the campus court at the American University of Iraq, Sulaimaniya. Taher convinced Hariri to join the team, which began in 2008 and is the university’s longest-running uninterrupted sports program. Erin Trieb for The New York Times

New nickname alert: How Kings rookie Nik Stauskas became ‘Sauce Castillo’
Being a right-minded individual, I instantly loved the idea of calling Nik Stauskas “Sauce Castillo.” There haven’t been very many positive experiences in this rookie season for Stauskas, whom the Sacramento Kings selected out of Michigan with the eighth pick in the 2014 NBA draft to provide an instant jolt of 3-point shooting and playmaking to their largely punchless backcourt, only to see him struggle mightily with his shot and confidence as the team has cycled through coaches, philosophies and rotations in a “circus” of a campaign. Talking about Stauskas hasn’t been much fun since the season started. Sauce Castillo could change all that. I felt like it was important to do what I could to make that happen.
http://sports.yahoo.com/blogs/nba-ball-dont-lie/new-nickname-alert–how-kings-rookie-nik-stauskas-became–sauce-castillo-180042667.html 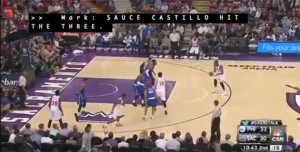