The PGA and its member tournaments and players have been amongst the most committed, whether measured by time or money, to charitable causes. Phil Mickelson is certainly an example of someone who is consistently in the mix, especially with educational causes.

The full article from the San Diego Tribune can be found at http://www3.signonsandiego.com/stories/2009/aug/23/freebies-lesson-charity-students/?education, with an excerpt provided below.

Freebies a lesson in charity for students

Thanks to a charitable foundation started by San Diego golf star Phil Mickelson and his wife, Amy, 1,500 needy students from Carlsbad to Ramona were bused to the Walmart on Murphy Canyon Road. The youngsters were armed with shopping lists guaranteeing them $200 each in merchandise.

Yesterday was the fifth “Start Smart” event sponsored by the Mickelsons, who to date have outfitted 6,500 students from 135 schools across the county. Their total monetary contribution now exceeds $1.3 million. 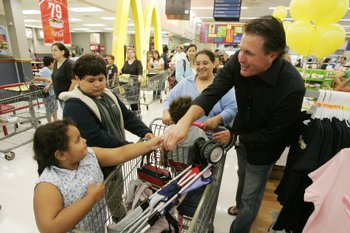 As moms and dads supervised, sleepy-eyed children — many were up by 4 or 5 a.m. — were able to pick out their own clothing without having their parents warily check price tags.

Sequoia Cope, 6, first eyed a bright-pink, chenille hoodie and then selected a T-shirt that read “Boys Saturdays Homework” while her grandmother looked on disapprovingly.

“This is a huge help. She wouldn’t get school clothes if it wasn’t for this program,” said a beaming Denny Cope, who is raising her two grandchildren.

Dale and Wendy Adams from Ramona went to Walmart with the two youngest of their 10 children, grateful that they were chosen by their children’s school to participate. Wendy Adams said the couple recently had opened a discount store in Ramona and were struggling.

“This is huge for us,” she said. “We weren’t going to buy new clothes. We were just going to give them hand-me-downs.”

Phil Mickelson attended the event with his three children; parents, Mary and Phil Mickelson Sr.; and in-laws, Renee and Gary McBride. He cheered on the participants as they made their way into the store.

“My wife, Amy, and I are real big on education and hope these kids, once they have new outfits and school supplies, are excited about the new school season,” Mickelson said. “The thank-yous and appreciation after they pick out some cool new clothes have been the most rewarding.”

(The article continues at http://www3.signonsandiego.com/stories/2009/aug/23/freebies-lesson-charity-students/?education)