Nationwide, we are facing an obesity and overall poor health epidemic. It truly is everywhere. For example, a recent study was done involving kids in Massachusetts which found that 1 in 3 overweight (and a sharp disparity linked to income.) The new study, which represents 38 percent of students statewide in the tested grades, found that 16.9 percent of children were overweight and 17.3 percent were obese. The Massachusetts obesity rate mirrors national studies, which have found that 17 percent of 2- to 19-year-olds are obese. To read the full article from Stephen Smith at the Boston Globe, please click here.

With these numbers, we need everyone – males, females, it doesn’t matter who – to address personal approaches to this problem but also to find ways to set a foundation on which healthy living can be promoted and implemented. Thankfully there are many trying to help create that foundation.

Last week United Way Worldwide President & CEO Brian Gallagher and NFL Charities Exec Dir Alexia Gallagher appeared live on CBS’ “The Early Show” this morning to promote their “Back To Football Friday” campaign to fight childhood obesity. On Friday, September 10, fans and activists across the country wore their favorite NFL team’s jersey or colors. The idea, other than showing off their team loyalty, is to help create awareness of the issue of obesity, especially amongst young people in the country. Fans were encouraged to host events to qualify for two tickets to the Super Bowl. Not a bad prize. 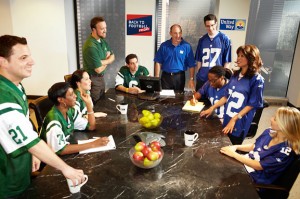 Another effort in combating obesity in the U.S. involves the good folks at the Women’s Sports Foundation and their GoGirlGo! program. Annually, GoGirlGo! funding and programming provides a number of girls with the opportunity to stay active, learn healthy life skills and grow their leadership skills.  One of the GoGirlGo! chapters is Boston and in light of the story above, the city is serious need of the continued great efforts of the Women’s Sports Foundation and similarly driven supporters.