Cycling IS a team sport

May is bike month in New York City. In addition to the Five Boro bike tour which took place this past weekend, there are a number of events that highlight the fun, benefits, and overall good feeling surrounding cycling. 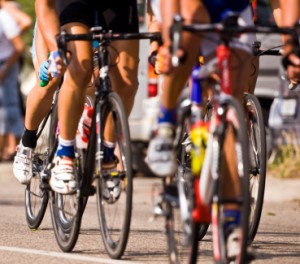 We love to ride, no doubt. And while we may ride in groups, small to those numbering the hundreds or even thousands, cycling is seen by many, when it comes to high-level competition, to be an individual sport. Lance Armstrong, for all that was said about his “team” was seen by the general public as an individual who won cycling’s greatest race.

But cycling does have a team element. And no doubt, one of community. We were made aware of a tremendous story of such community in the cycling world. The story is moving, disturbing, and ultimately, inspiring, both for the individual efforts of Damian Lopez Alphonso and the “team” efforts from fellow cyclists. We lead with an excerpt from the story. You can view the full article from Velocity Nation, “A Tale of Ultimate Survival and Human Kindness,” by clicking here.

At age 13, while trying to retrieve a kite caught on an electrical wire in his native Cuba, Damian Lopez Alphonso was electrocuted with 13,000 volts of electricity – the voltage equivalence of what it takes to move a New York City subway car.

He spent 52 days on life support following the accident and has had dozens of surgeries – some life-saving – since his teens. Doctors are still baffled by the fact that he’s alive.

But Damian, now 34, hasn’t allowed these seeming setbacks to slow him down – literally.

Although he lost both of his hands and uses no adaptive devices, Damian is an accomplished cyclist, who finished first at the Coppa 8 de Marzo Time Trial, second at the Tour of Havana de Este, and third at the Criterium de Havana against some of the best athletes in his region…

Tracy Lea, a fellow cyclist and a Team Fuji ambassador, first witnessed this balancing act at the 2002 Pan American Championships in Cuba. Mesmerized by how he could compete without prosthetics and not in the Paralympics realm but against some of the best able-bodied cyclists in the world, Lea decided she wanted to help him in any way she could.

After much lobbying with the Cuban government, Lea secured a visa for Damian, and he arrived in the U.S. on December 6. So when Damian arrived in New York, a brand new Fuji Roubaix ACR was waiting for him, and Lea took him to Echelon Cycles, a Fuji dealer on 8th Avenue in Manhattan, for a full fitting.

With his new bike in tow as well as some new cycling gear provided by Louis Garneau and Hincapie Clothing. Damian set off for the NYU Langone Center.

After undergoing a week of extensive physical and psychological exams, the NYU doctors determined that Damian is eligible for prosthetics and facial reconstructive surgery.

Elated by the news but knowing that neither she nor Damian’s family could pay for the surgery and prosthetics, Lea reached out to the cycling community. Several private individuals (Lea’s fellow cyclists) have since offered to cover Damian’s travel expenses; the National Foundation for Facial Reconstruction has offered to pay for the surgery; and the Achilles Foundation, a non-profit organization that enables disabled and able-bodied athletes to train together, has offered to pay for his prosthetics.

“Everyone has stepped up,” said Lea. “He’s achieved incredible acceptance in the cycling community.”

…It’s because of Lea and the cycling community’s generous contributions that Damian is where he is today. But it’s going to take a lot more to see Damian’s dreams realized. If you’d like to help Damian, please contact Tracy Lea at tlea@tracylea.net or visit the Achilles Foundation’s donation page at www.achillesinternational.org/support/individual or the National Foundation for Facial Reconstruction’s homepage at www.nffr.org.