Welcome to week seventy-one of the Sports Doing Good newsletter.

We saw this great quote in the newsletter from our friends at Sports and Social Change. Hall of Famer Satchel Paige, a legend in the Negro Leagues who made his appearance in Major League Baseball at the ripe old age of 42 and pitched professionally into his late 50s, embodied the spirit of everyone who loves sports. His passion for playing the game and the fans that supported him fueled a career that lasted forty years.

As we get older it is good to know that there are opportunities to stay active, whether as part of a formal team/league or just in pick-up games involving friends and strangers alike. I have been fortunate to be part of both this summer. Playing pickup soccer for the past seven years in my hometown of Rockville Centre on Long Island takes me back to the hundreds of games and practices I experienced as a kid. Our games, while competitive, are infused with the ideals of support, encouragement, fair play, and good-natured ribbing.

A newer phenomenon for me is participation on a co-ed soccer team in Brooklyn. I joined the league as an “individual” and was subsequently placed on a team. After a first scrimmage in which everyone seemed to struggle with the full-field play and the oppressive heat, we came back the following 10 Sunday’s to achieve something that is hard to measure, i.e. friendship.* Despite the diverse mix of individuals, we were bound by our love the game of soccer and a competitive spirit that never leaves us, it just gets redirected.

*In addition to the friendship, it was also nice to win the league and then the playoffs. Way to go “No Soccer ‘Til Brooklyn!! 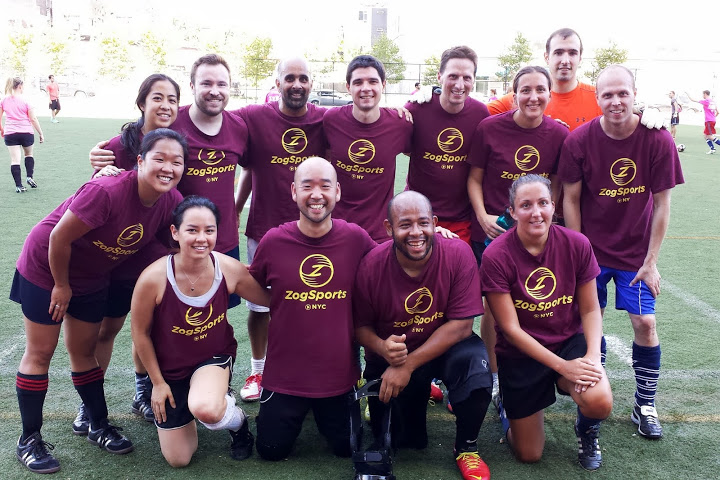 We came across two stories that capture that spirit involving The Oakland Women’s Rowing Club and the reincarnation of the New York Cosmos soccer club. Both stories involve athletes and fans with a keen sense of longevity, tradition, and passion. Along with those two stories, we are happy to share those involving: Roger Federer, Craig Breslow (Carnegie Exclusive Interview), Katarina Witt, Up2Us, FC Barcelona, Stephen Curry, Hoops 4 Hope, Nik Lentz, and Bayer Leverkusen, amongst others.

Cancer survivor shares her heartwarming story of meeting Roger Federer
One of the best parts of that story is not only how great Federer was to this young girl, but how you can feel the excitement in her writing. This isn’t just a fan, but a girl that had a dream and a great organization and a respected athlete that made it happen.
http://sports.yahoo.com/blogs/tennis-busted-racquet/cancer-survivor-shares-her-heartwarming-story-meeting-roger-143050082.html 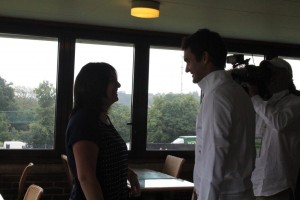 Carnegie Exclusive Interview: Craig Breslow, Pitcher, Boston Red Sox
Having been inspired by his sister’s battle with cancer at a young age, Craig later founded The Strike 3 Foundation which works to heighten awareness, mobilize support, and raise funds for childhood cancer research. We caught up with Craig to learn more about his foundation and how he’s inspiring other MLB players to get involved with its cause, about which he is very passionate.
http://carnegiese.tumblr.com/post/57544594828/carnegie-exclusive-interview-craig-breslow-boston-red

The Tao of Katarina Witt
Witt has since gone from a child reared to be a Communist propaganda symbol to an international celebrity and adroit capitalist. No European athlete approached the crossover appeal she had on both sides of the Atlantic until, perhaps, David Beckham.
http://espn.go.com/espnw/w-in-action/nine-for-ix/article/9542978/espnw-nine-ix-tao-katarina-witt 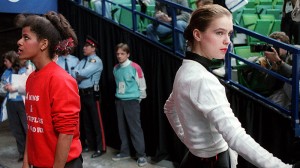 The “Battle of the Carmens” showdown between Debi Thomas and Katarina Witt was one of the must-see events of the 1988 Calgary Olympics.  Jerome Delay/AFP/Getty Images

Ladies of the Lake: Oldest women’s rowing club in the U.S.
The Oakland Women’s Rowing Club, also known as the “Ladies of the Lake” is the oldest women’s rowing club in the United States.  Founded in 1916, the club rows in four whale boats every Wednesday morning on Oakland’s Lake Merritt and is comprised of women between 60 and 80 years old.
http://news.yahoo.com/photos/ladies-of-the-lake-oldest-women-s-rowing-club-in-the-us-slideshow/ 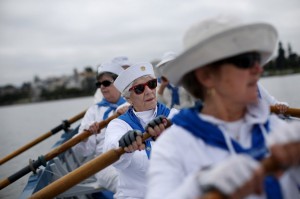 The members enjoy the companionship of the club as well as the exercise and tradition. (Photographs by Justin Sullivan/Getty Images)

Revived Cosmos get a second chance at a first impression
Toward that end, O’Brien’s vision for the Cosmos is almost a reverse engineering of the previous regime, a bottom-up, bide-your-time approach rather than a top-down smash and grab. And the base he has chosen to serve as the team’s launch pad is the same one from which the original Cosmos began their quest for world domination: the North American Soccer League.
http://espnfc.com/blog/_/name/kickingandscreaming/id/510?cc=5901 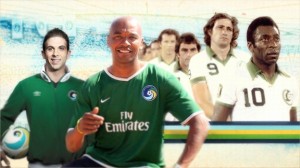 CASTING A SHADOW: Can players like Marcos Senna and Ayoze help the new Cosmos recapture the glory years of Pele, Chinaglia and Beckenbauer?  ESPN.com Illustration

Getting the ending we want: Film-making, keeping records, and sport and development
Football Under Cover, a documentary about two women’s football teams meeting to play in Teheran, Iran, is an inspiring story. But is it also evidence that recording our goals helps us to achieve them?
http://www.sportanddev.org/en/newsnviews/news/?5933%2F1%2FGetting-the-ending-we-want-Film-making-keeping-records-and-sport-and-development
(video – http://youtu.be/72M0lh81JOI)

It’s Up To Us: How Sports Can Help Save New Orleans
The future of sports relies on children, but perhaps the future, for many children, including this city’s next generation, rests upon sports. Up2Us has chosen New Orleans to lead a national effort to ensure that all children have a place to play and a chance to learn and grow by giving them a coach and an atmosphere in which they can move forward.
http://www.livingneworleans.com/?p=9092&awesm=lfshare.me_SavingNewOrleans

First class of LGBT athletes to be inducted in hall of fame
It’s news each time a professional athlete comes out as gay because, in the sports world, simply doing your job as an openly lesbian, gay, bisexual or transgender person is a big deal, said Bill Gubrud. That’s why Gubrud founded the National Gay & Lesbian Sports Hall of Fame, which will induct its inaugural class of 26 gay and allied sports figures.
http://articles.chicagotribune.com/2013-07-31/news/ct-talk-lgbt-hall-of-fame-20130801_1_lgbt-athletes-inductions-fame 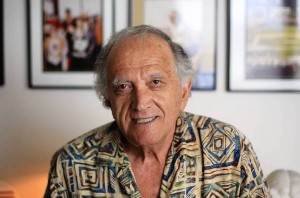 FC Barcelona ends ‘Peace Tour’ with Tel Aviv display
As Messi juggled the ball, thousands of Israeli youngsters in the crowd at Bloomfield Stadium in Tel Aviv cheered his name. Dozens of young Israelis, including Israeli Jews and Arabs from the Peres Center for Peace, took part in the training session alongside Barcelona’s stars, including Dani Alves, Gerard Pique, Andres Iniesta and new signing Neymar.
http://www.newsday.com/news/world/barcelona-ends-peace-tour-with-tel-aviv-display-1.5827231 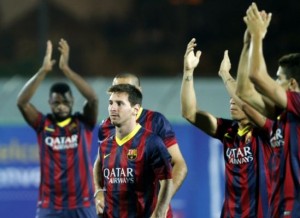 FC Barcelona’s Argentine striker Lionel Messi stands among his teammates during a football clinic session with Palestinian children in the West Bank city of Hebron, Saturday, Aug. 3, 2013. The Spanish club arrived in the region Saturday with superstars Messi and Neymar touching down in Tel Aviv. They then headed to Bethlehem, where they visited Jesus’ traditional birthplace and met with Palestinian President Mahmoud Abbas. (AP Photo/Nasser Shiyoukhi)

Net gain: NBA star guard Stephen Curry hands out malaria prevention to African refugees
These refugees don’t know dunks, nor do they know why a 25-year-old NBA star, coming off his breakout season, would fly more than 8,000 miles and 24 hours, risk malaria, typhoid and yellow fever, just to hang bed nets in their mud huts for the anti-malaria program Nothing But Nets. On his vacation.
http://espn.go.com/nba/story/_/id/9543252/stephen-curry-hands-mosquito-nets-prevent-malaria-tanzania 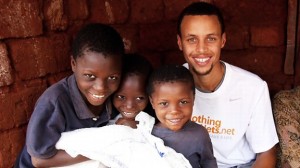 Stephen Curry donated 816 nets to African refugees: three nets for each 3-pointer he hit this season. Courtesy of Stuart Ramson/Nothing But Nets.

Hoops 4 Hope and Peter Kazickas Have Formed a Bond
“The program in Zimbabwe has probably doubled in size since I was there the last time,” in 2011, Kazickas said during a conversation at The Star the other day. “But the supplies haven’t doubled. There’s a real need for basketballs, sneakers, coaches. . . . Yet, even though there may be 300 or 400 kids on one court — with 5 to 10 balls if we’re lucky —they’re still learning and having fun five days a week as they always have been.”
http://www.easthamptonstar.com/Sports/2013731/Hoops-4-Hope-and-Peter-Kazickas-Have-Formed-Bond 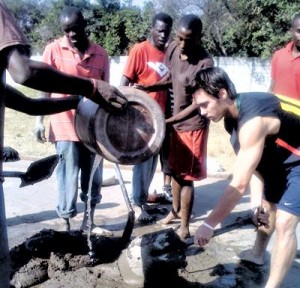 Orlando Magic Impacts Youth from Parramore at Back to School Celebration
The Magic teamed with Dixon Ticonderoga and Amway to provide backpacks filled with school supplies to help prepare the students for the upcoming school year. In all, more than 2,100 backpacks filled with pencils, paper, hygiene products and other supplies were distributed to students.
http://www.nba.com/magic/news/denton-magic-hosted-third-annual-back-school-celebration

An open letter to youth sports leaders – Promote your heroes
Almost unanimously, professional youth sports administrators who oversee the fields at parks and recreation facilities across the country will say what a great group of volunteers they have but they will almost always concede that it’s a very small group, or even an individual who ends up taking a majority of the responsibility.
http://www.nays.org/article/10809-An-open-letter-to-youth-sports-leaders?utm_source=August+2013+-+NAYS+update&utm_campaign=August+2013+Newsletter&utm_medium=email 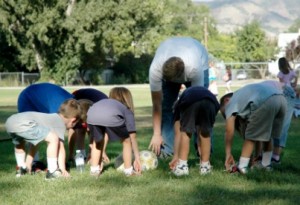 Body Glove to Launch Eco-Friendly Footwear Line
While looking at carbon offset programs it became more important to explore responsible manufacturing programs that were better for the environment and still produced high quality performance based products. Body Glove’s collaboration with PLUS Foam will be introduced at this summer’s Outdoor Retailer Show in Salt Lake City, Utah.
http://www.sportsandsocialchange.org/index.php/component/content/article/3-recent-press-release-and-annoucements/655-Body-Glove-to-Launch-Eco-Friendly-Footwear-Line&Itemid=46

2013 Waste Management Phoenix Open Sets Sustainability and Environmental Responsibility Milestones
The 2013 Waste Management Phoenix Open earned Gold Certification from the Council for Responsible Sport for its socially and environmentally responsible efforts in the planning and execution of the tournament. This is the first PGA TOUR tournament to receive such a designation. The Phoenix Open diverted 100 percent of tournament waste away from landfills and into recycling and composting facilities, as part of the tournament’s Zero Waste Challenge.
http://online.wsj.com/article/PR-CO-20130806-910179.html 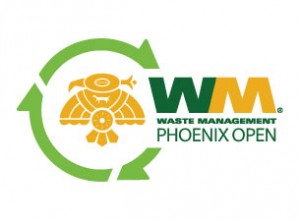 Nik Lentz used Fight of the Night bonus money to pay for father’s life-saving surgery
“I always believed that Nik had that special ability,” Jon Lentz said. “I know the day will come when Nik wins that UFC [belt]. I know that will happen. He knows it, too. And I’ll tell you what: When he gets there, that is a fight I am not going to miss.”
http://sports.yahoo.com/news/mma–nik-lentz-fight-of-the-night-bonus-father-cancer-surgery-061615295.html 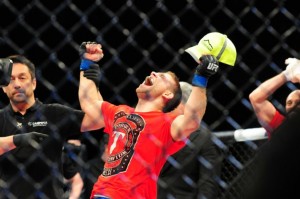 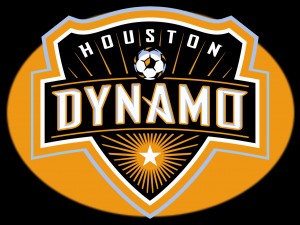 Brooklyn Cyclones hand out free tickets to Staten Islanders most affected by Hurricane Sandy
“It is part of our Meaningful Monday promotional series,” said Perone, the team’s director of new business development.”On that date for every ticket we sell $3 is going back to the Siller Foundation to give back to the families on Staten Island.”
http://www.silive.com/sports/index.ssf/2013/08/brooklyn_cyclones_hand_out_fre.html 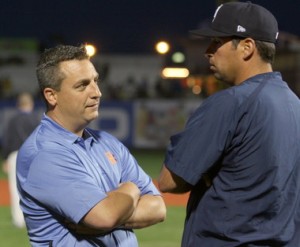 Why has coverage of women’s sport stopped post Olympics?
Sport is no different. Sarah Attar is being held up by many as an example to young girls in Saudi Arabia. A trailblazer to inspire not just a generation but a whole shift in society. Maybe a few more of us need to take note.
http://www.cnn.com/2013/08/07/sport/olympics-women-equality-attar/index.html?sr=sharebar_facebook 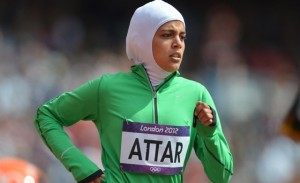 Bayer Leverkusen opts for charity partner DKMS as shirt sponsor search continues
Leverkusen, which finished third in the 1.Bundesliga last season, will take on SC Freiburg on Saturday with its shirt bearing the brand of German Bone Marrow Donor Database (DKMS). The club said its first two match days will provide a platform for the DKMS campaign on the search for and identification of stem cell donors for people with leukaemia and other blood-related diseases. In addition to shirt sponsorship, DKMS will also be visible on camera carpets, videos, TV ads on the video walls at the BayArena, in Bayer 04 publications, as well as on internet and social media platforms.
http://www.sportbusiness.com/sponsorship-insider/bayer-leverkusen-opts-charity-partner-shirt-sponsor-search-continues 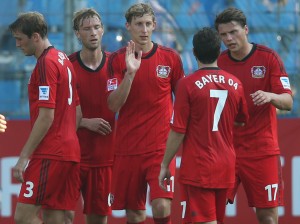