Welcome to week one hundred twenty of the Sports Doing Good newsletter. This week’s 10 stories include:

Introduction
Over the past year we have seen a marked increase in the discussion about the inclusion of the LGBT community in sports, whether as participants or as fans. With the NBA’s Jason Collins and NFL’s Michael Sam, along with athletes such as Brittney Griner from the WNBA and Robbie Rogers from MLS, we are in the early part of what, while not a tidal wave of individuals, is surely a time of a more accurate representation of the participants in sports. And with the efforts by the various pro leagues themselves to promote inclusion at every level, we are seeing those with power and influence sharing their leverage to promote the inherent positives of sport: teamwork, fair play, acceptance, and friendship.

This week we include a story of Major League Baseball hiring one of its former players to serve as “Ambassador of Inclusion.” Whatever title Billy Bean has, or any other person working to ensure equality for those in the LGBT community or any other marginalized group, these very public efforts are surely contributing to a more equitable sports industry and society at large.

Other stories we feature this week include: the great work done by the non-profit love.futbol; a pioneer in the world of lacrosse in Africa; the blossoming of a tennis community in a tough area in Michigan; legendary sports figure Chuck Taylor (he wasn’t just a shoe!); a homecoming with purpose for Tennessee Titans linebacker Moise Fokou; former college gymnast and current superstar fitness competitor Kacy Catanzaro; sisters Nneka and Chiney Ogwumike of the WNBA and their work for youth in Nigeria; ESPN’s growing commitment to The V Foundation; and up and coming golfer – and full-time factory worker – John Singleton getting a chance to play in one of golf’s premier events, the British Open.

In shadow of Brazil World Cup, a nonprofit builds fields of hope
A nonprofit co-founded by Washington native Drew Chafetz is responsible for the favela’s giant year-old soccer field with red fencing wrapping around the perimeter. At the same time Brazil’s municipal governments and soccer officials scrambled to construct and refurbish a dozen World Cup stadiums, Chafetz and his modest outfit have been busy building their own fields around Brazil, working with considerably smaller budgets and with sights set on an impact that will continue to be felt long after this World Cup.
http://m.washingtonpost.com/sports/dcunited/in-shadow-of-brazil-world-cup-a-nonprofit-builds-fields-of-hope/2014/07/11/c8fa3078-093b-11e4-ba5b-b9d8a4daba13_story.html 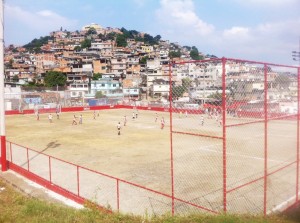 Children in Rio de Janeiro’s Complexo do Alemão favela have been playing on a soccer field built by nonprofit love.futbol since April 2013. (Photo courtesy Rodrigo Édipo)

Onen Scores One for Uganda, Makes History Again
Three years ago, Onen scored the first goal in the first game played on African soil. Playing for the Panthers in the August 2011 King’s Cup, he won the opening faceoff, ran forward, spun and scored. To hear the Ugandan team general manager Tyler Steinhardt explain it, some 3,000 fans at Makerere University Business School (MUBS) in Kampala, Uganda, stormed the field. “I scored the first goal in Africa. I’m very glad to come to America, another continent, in the world games of lacrosse, and to score again the first goal,” Onen said. “It’s a moment I will remember for a long time.”
http://www.laxmagazine.com/international/men/2013-14/news/071114_onen_scores_one_for_uganda_lacrosse_makes_history_again 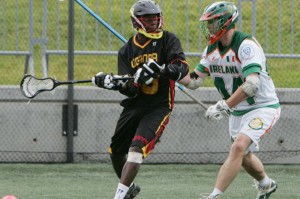 At a New Michigan Club, a Touch of Wimbledon at Members’ Feet
Mayor Deidre Waterman of Pontiac is happy to see the dormant land in the heart of her 59,000-resident city come back to life. Pontiac, like Detroit, has been under state control because of financial problems. It emerged from a five-year run under an emergency manager in 2013. “We’re working on recreating ourselves with a new spirit and vision, and this dovetails perfectly with the new Pontiac,” Waterman said. “We want to bring things that are unique and special to the city.”
http://www.nytimes.com/2014/07/09/sports/tennis/a-touch-of-wimbledon-in-pontiac-michigan.html?_r=2 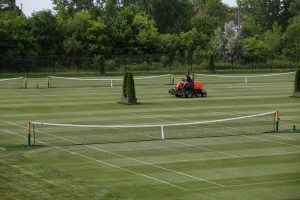 The Wessen Lawn Tennis Club in Pontiac, Mich., has 24 grass courts, and players must adhere to an all-white dress code. Credit Joshua Lott for The New York Times

Meet Chuck Taylor: The Man Behind The All Star
“He loved the game [of basketball]. He loved being a part of it. He put on clinics all over the country, helping kids learn how to play a little bit better,” said Dean, who later served as the athletic director at Louisiana State University and is in the College Basketball Hall of Fame. “He was a loveable guy and fun to be around and a nice guy, and he, at one point, knew every college basketball coach in the country. And if you wanted to hire a coach, you went through him. He’d recommend somebody.”
https://onlyagame.wbur.org/2014/07/12/chuck-taylor-converse-best-of?utm_source=facebook.com&utm_medium=social&utm_campaign=npr&utm_term=nprnews&utm_content=20140713 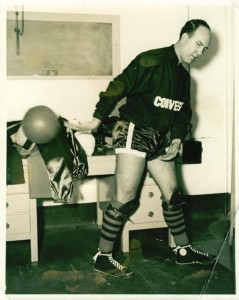 NFL player returns to Potomac; Tennessee Titans linebacker and Bullis grad interacted with nearly 300 children
Fokou, who said he relished the opportunity to return to his alma mater and connect with local youth, said he believes it’s important for athletes who reach a certain status to give back. His Root 53 Foundation, which according to the organization’s website is “rooted in his passion for supporting under-served youth,” is geared toward providing educational support to under-served communities… Fokou’s organization partnered with Leveling the Playing Field, a non-profit organization founded by Bethesda native Max Levitt that helps support at-risk youth’s involvement in athletics by providing necessary equipment, Saturday.
http://www.gazette.net/article/20140713/SPORTS/140719809/1123/nfl-player-returns-to-potomac&template=gazette 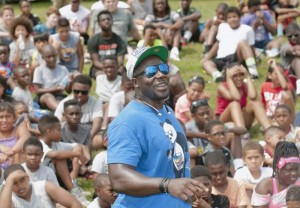 Female gymnast dominates American Ninja course that would break you in two
You could not do this. You think you could, but you could not. This is Kacy Catanzaro, a former Towson University gymnast. She’s five feet tall and weighs 100 pounds. And she just became the first woman to reach American Ninja Warrior’s finals with this standout obstacle course performance. Just imagine doing any of the multiple obstacles Catanzaro cruises through with little difficulty here. We’d break in half, we would.
http://sports.yahoo.com/blogs/the-turnstile/gymnast-dominates-american-ninja-course-that-would-break-you-in-two-134956430.html
(Video, http://youtu.be/XfZFuw7a13E)

WNBA Stars Nneka and Chiney Ogwumike Launch Fundraising Competition to Help Children in Nigeria
WNBA stars Nneka and Chiney Ogwumike today launched a fundraising competition open to participation by girls’ middle and high school basketball teams across the country. The competition will raise funds to support UNICEF programs focusing on girls’ education and empowerment such as the Girls’ Education Project, which aims to give one million girls in Nigeria access to quality learning, provide scholarships for female teachers and establish safe spaces for girls.
http://www.unicefusa.org/press/releases/wnba-stars-nneka-and-chiney-ogwumike-launch-fundraising-competition-help-children 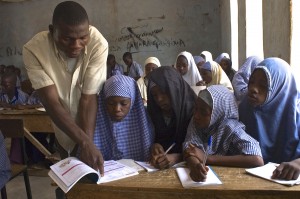 A teacher helps Hafsatu, 13, at a UNICEF-supported school in the northern state of Bauchi, Nigeria.

MLB hires Billy Bean as Ambassador for Inclusion
Bean added in a statement, “MLB continues to lead by example with its social conscience and vision. It is our mission to create an equitable working environment, free of discrimination and prejudice for every player, coach, umpire, and member of the MLB family. “As a young man, I silently walked away from baseball for all the wrong reasons, and today I am truly humbled that the Commissioner’s Office has brought me back to lead the effort on inclusion. I will honor baseball’s great tradition, and be the resource that our current and future players need as they embrace their responsibility as role models to our fans.”
http://www.torontosun.com/2014/07/16/mlb-hires-billy-bean-as-ambassador-for-inclusion 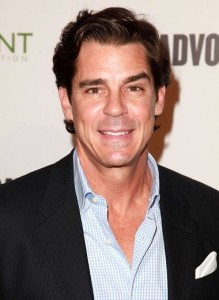 ESPN’s ESPY Day Benefits The V Foundation
ESPN will expand its 21-year effort to help find a cure for cancer during The 2014 ESPYS presented by Capital One with a day-long fundraising drive across multiple ESPN platforms today, July 16. ESPY Day Benefitting The V Foundation for Cancer Research will begin at midnight ET with integrated fundraising messaging across ESPN networks culminating with a special simulcast of the ESPYS on ESPN2 at 9 p.m. The simulcast will include fundraising elements and heavy social media integration of the hashtag #DontEverGiveUp, inspired by Jim Valvano’s iconic speech at the 1993 ESPYS.
http://www.broadwayworld.com/bwwtv/article/ESPNs-ESPY-Day-to-Benefit-to-Help-The-V-Foundation-20140715# 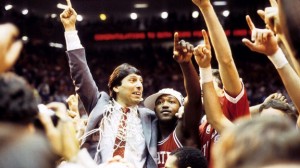 Factory worker makes it a blue-collar British Open
There comes a time when one must get on with the rest of his life, a reality that Singleton seemed to acknowledge by taking the factory job. But he never lost his love of golf, and with his knees healed and the British Open right in his own backyard, he mustered up the 140-pound qualifying fee (about $240) to give it a shot. Talk about hitting the jackpot. Singleton hopes this is only the beginning. ”This is just a steppingstone for me,” he said.
http://sports.yahoo.com/news/factory-worker-makes-blue-collar-200016168–golf.html 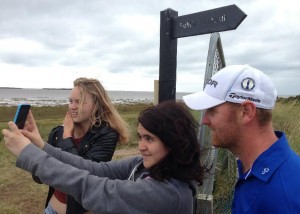 In this photo taken with a mobile phone, spectators take a selfie with John Singleton of England after his television interview at the Royal Liverpool golf club, Hoylake, England, Wednesday July 16, 2014 where the British Open Golf championship will start Thursday July 17. (AP Photo/Paul Newberry)