Welcome to week one hundred ninety-five of the Sports Doing Good newsletter. This week’s 10 stories include:

Introduction
We want to wish everyone a very happy and healthy New Year. We are confident that we are going to see a lot of good each week, making 2016 another great year. There was so much good that happened in 2015. In case you need a reminder, please feel free to check any and all of the newsletters from last year at www.sportsdoinggood.com. All previous newsletters are archived and freely accessible at the website.

We start off this week’s newsletter by featuring a piece from The Players’ Tribune highlighting 15 of its favorite photos. The Tribune has quickly established itself as a wonderful venue for athletes to express themselves in longer form. Sure, 140 characters are good for some things, but when you want to, say, announce your retirement from the NBA after having a legendary career, you DO NOT go to Twitter. For Kobe Bryant and so many other athletes, the Tribune has been a great opportunity to be heard. And we end the newsletter with a look at some of the major and not-so-major (but certainly still important) events taking place in 2016. As we said earlier, this will be a great year.

The other stories we feature this week look at: the incredible efforts of New York Jets wide receiver Kenbrell Thompkins; the strong stance taken by some of the NBA’s top stars against gun violence; the varied talents of former NFL star Eddie George, now appearing on Broadway; the development of a young soccer player and burgeoning leader; the unifying power of the sport of boxing in Africa; a brilliant new technology that both encourages soccer playing and benefits from it simultaneously; a heartfelt piece regarding the power of sport from soccer journalist Luis Miguel Echegaray; and 15 compelling stories from 2015 involving Team USA athletes. 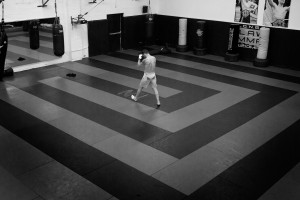 In May, we went inside UFC star Chris Weidman’s training for his fight against Vitor Belfort. Photograph By Samantha Appleton/The Players’ Tribune

After a Difficult Start, a Jets Receiver Prepares, Stays Alert and Rises
Kenbrell Thompkins wakes up at 5 a.m. on weekdays. He dresses, reads some Bible passages and arrives at the Jets’ complex here by 5:45. When he enters the locker room, none of his teammates are inside, not even his fellow receiver Brandon Marshall, who was astounded to discover that someone could beat him there. After stretching and soaking in a hot tub, Thompkins runs routes in the field house with the backup quarterback Geno Smith. Until he catches 300 passes, Thompkins does not leave. “Just to get my hands ready for the day,” he said. Thompkins finds comfort in the routine, and the routine gives him purpose. It centers him. He receives few snaps with the first-team offense but prepares as if he will start. If he plays, he will be ready. That is what he promised himself, and it is what the Jets have learned about him.
http://www.nytimes.com/2015/12/27/sports/football/after-a-difficult-start-a-jets-receiver-prepares-stays-alert-and-rises.html?ref=sports 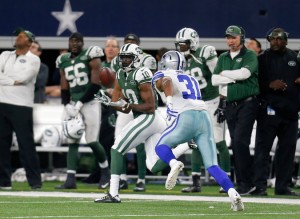 The Jets’ Kenbrell Thompkins making a 43-yard catch against Dallas to set up a winning field goal. Brandon Wade/Associated Press

Stephen Curry and other NBA stars headline anti-gun-violence PSA
Shocked by the number of people who die each day from gun violence in the U.S., NBA stars appeared in a new PSA in a bid to end the shootings. The ad, which is directed by Spike Lee, features stars Carmelo Anthony, Stephen Curry, Joakim Noah and Chris Paul as well as the families of victims who have lost their lives to gun violence. President Obama showed his support for the NBA and the ad. The PSA is a joint effort between the National Basketball Association and Every Town for Gun Safety.
http://www.cnn.com/2015/12/23/us/nba-stars-in-psa-to-end-gun-violence/ 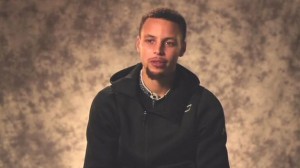 Former NFL star Eddie George Is Back in the Spotlight — On Broadway
Football functions as an accurate metaphor for Broadway, but it’s also been instructive in George’s development as an actor. At its core, football offers its own version of theater, and George spent years as a member of its leading cast. In the theater, he’s found similarities that help him understand his role within a production. “You have to trust your castmates and have to do what [your part] calls for,” he says. “I have to come through in a very honest way. It’s much like in football — I had to trust [my teammates] to do their thing, but sometimes I had to improvise. “[In football] you’re telling the story of battle on the field, when you don’t really know the outcome of the football game, but you know the outcome of a play. But it’s so important that you don’t reveal that [ending] and stay moment-to-moment. It’s the same in football, you have to stay present.”
http://www.thepostgame.com/balancing-act/201512/gridiron-broadway-eddie-george-back-spotlight

Building a soccer player and a leader (from Up2Us)
It’s hard as a coach to see changes in your youth. You work with them every day, and improvement is gradual, but it still comes. Sometimes it means taking a step back, letting them try out the skills you have taught them in a new setting, such as a new team.  At Up2Us Sports’ training institutes, we discuss the power of sport, especially when the coaches are trained in SBYD strategies. We also discuss the importance of adult role models in the lives of our youth and how having a stable, supportive relationship can build self-confidence in them. Saraa’s improvement, not just as a soccer player but as a leader, is one of my proudest achievements as a coach. She put in so much effort at Starfinder last year, and it took courage to lead her school team. So you can bet I gave her some Up2Us Sports-style TLC after the game. I told her that her improvement in communication showed a lot of leadership, and then I gave her a hug to celebrate her growth.
http://up2usblog.org/?p=2096 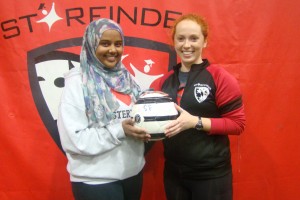 Boxing unites Christians, Muslims in war-torn C. Africa
Until recently, there were regular clashes between young Muslim vigilantes and their Christian anti-Balaka rivals, with the two sides facing off in a swathe of no-man’s land that encircles the district. But after Pope Francis visited the neighbourhood late last month, bringing a message of peace and reconciliation and insisting that Christians and Muslims are “brothers”, things have been calmer. “We have had some respite since Pope Francis visited and we must consolidate the message,” Loutomo says. Boxer Ngassima, a young Christian teenager who “hasn’t set foot in this place for two years”, came to look for a Muslim friend from his childhood. “This is a great day,” he says, his eyes shining after finding his friend and embracing him. Just beside the ring where the boxers are fighting is a large billboard bearing a map of the country and images of people handing over their weapons. “Peace” it reads in French. Although it is nothing to do with the event, the message fits. At the ringside, several judges sit on plastic chairs watching the action. One of them is Gaspard Kopkapka, a veteran member of Central Africa’s boxing association, which counts several hundred members. “All we hear is talk of war, and we’ve had enough,” says Kopkapka, who competed in the World Amateur Boxing Championships in Belgrade in the late 1970s. “We must keep our young people busy. Sport is the best way to cope.”
http://watch.peace-sport.org/boxing-unites-christians-muslims-in-war-torn-c-africa/ 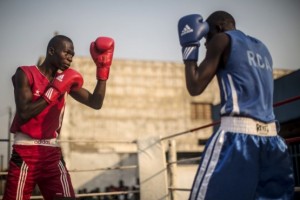 Nigeria Scores Africa’s First Pavegen Pitch
The technology, designed by a young British engineer, consists of placing electronic tiles under the artificial turf, which is converted into power by kinetic energy. Each time a player steps on a tile, seven watts of electricity are generated and sent to a battery…The man behind the technology, Laurence Kemball-Cook, launched his own company Pavegen, four years ago. Since then, the invention has been installed in 150 locations across the globe from parks and airports to shops and even dance floors. “Inspiring new generations with new technology is essential,” he said, “particularly in Nigeria where residents often have just a few hours of power a day because of an erratic electricity supply. As a result, households and companies are forced to rely on heavily polluting generators.” Kemball-Cook said the pitch would not only help “create a community” but also showed the need to diversify Africa’s energy mix. “We need solar, we need other solutions as well… we need it right now, we don’t want to be using these fossil fuel generators. We need to be using more renewable sources of power,” he said.
http://www.beyondsport.org/articles/nigeria-scores-africas-first-pavegen-pitch/ 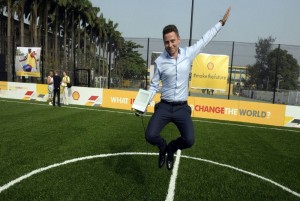 Beyond the highlight: The social power of sports and what I’ve learned along the way
It was this time last year when I was at an impasse in my life. I was 33 years old and just like good ole’ Jerry, I was lost. I didn’t know what to do. Before this, I was an unemployed actor and T.V writer, before that, a soccer player and a coach. And then, one late evening, my wife and I were watching Anthony Bourdain’s “No Reservations” and I thought, “Wow, he has a great job. All the traveling and eating. Discovering the world and getting paid for it!” But it was more than that. I began to realize that people, real people, with real stories, are truly remarkable. And more importantly, they have something to say. They want to tell us their stories. Just like Jerry, I had an epiphany. Breakdown? Breakthrough. So, in November of 2014 I decided I wanted to become the Bourdain of sports. I wanted to go to communities and see how people used sports in order to better themselves and their neighborhoods. I wanted to collaborate with people and see how a game, any sport, unites them. I decided to shoot a short documentary and it would be about my true passion: soccer.
https://medium.com/@lmechegaray/beyond-the-highlight-the-social-power-of-sports-my-role-as-a-journalist-and-what-i-ve-learned-f5f2b8ad616a#.o11qal5ia 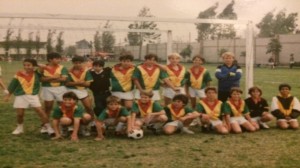 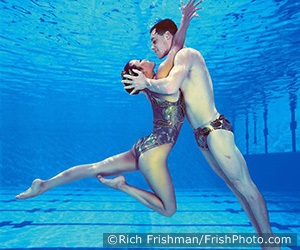 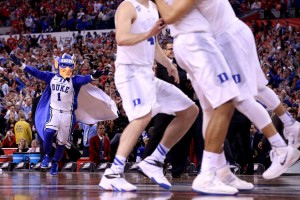 Will defending champion Duke be among the four teams that make it to Houston? Credit Streeter Lecka/Getty Images