I thought I had enough to deal with as a fan of the Mets and all of the injuries they are suffering through. No matter the sporting competition, one of the facts of life are injuries.  However, the fact though they occur on the pitch, rather than off of it, is something to take comfort in.

Team India arrived here with a full squad after gruelling try outs from all of India.  But now they are reduced to playing with half a team after being plagued by injuries and medical complications.

Nirnay was the first team member to fall during the second game when he was goal keeping and fell on his wrist resulting in a micro fracture.  Soon afterwards, Savio the Captain of the team tore a ligament in his knee after a tackle against England.  Vikas is suffering from an undiagnosed pain in his ankle, and although able to run onto the field, he is unable to reach his full potential.  Lastly Mohen, aged 49, discovered today that he has increased blood sugar levels which will prevent him from playing for the moment.

Undoubtedly, these injuries are disappointing both for the individual players and for the team, as the players have worked hard to get here and frustrated that their team can not play at their best.  To date, they have not won a game.  Yet Team India are still smiling and enjoying their experiences in Milan.  They still cheer on each other and other teams, and work together to take care of each other. 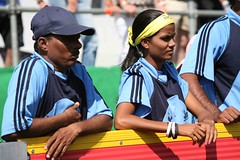 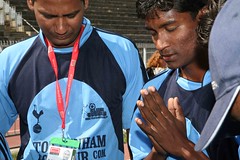 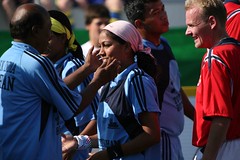